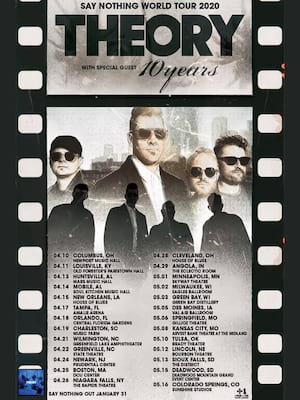 Theory Of A Deadman

Why See Theory Of A Deadman?

The Say Nothing World Tour

Formed in 2001, hard-rocking Canadian quartet Theory Of A Deadman became the first act to sign to Nickelback frontman Chad Kroeger's Roadrunner Records imprint label 604 Records. Releasing their debut record and breakthrough single Make Up Your Mind just a year later, the outfit embarked on a journey into mainstream rock, becoming one of the genre's most successful acts thanks to their heady fusion of post-grunge, alternative rock, and metal.

Almost two decades after their formation, the band have released their seventh studio album Say Nothing and are hitting the road to support the record on the Say Nothing World Tour. The album finds the band collaborating with Swedish music producer Martin Terefe once more, a partnership that saw the pop-rock sound of their last offering Wake Up Call, as well as exploring topical themes like domestic violence and racism.

Seen Theory Of A Deadman? Loved it? Hated it?

Sound good to you? Share this page on social media and let your friends know about Theory Of A Deadman at Val Air Ballroom.